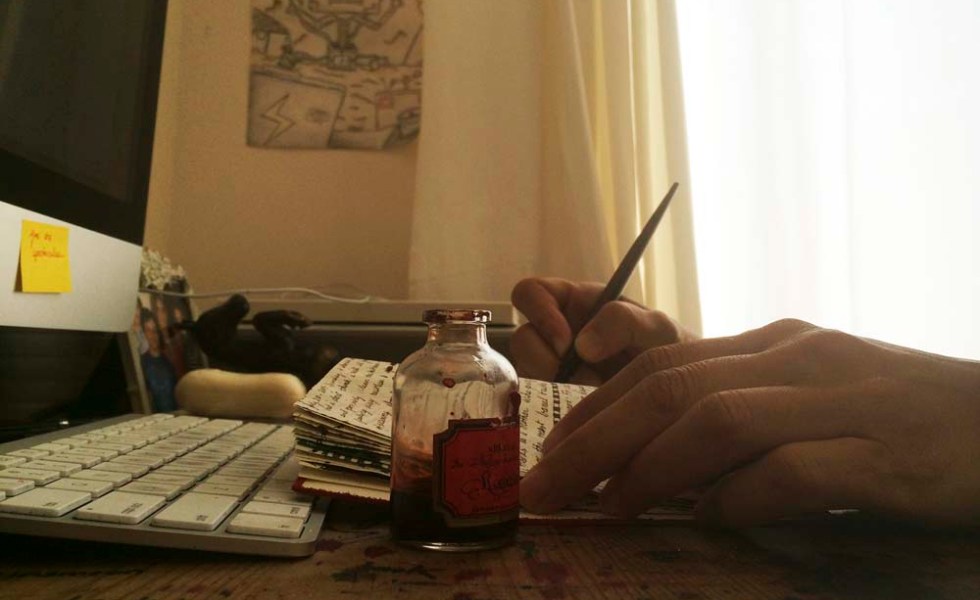 Ok, I need to explain something. This is my new new journal. The book itself is actually one of four I ordered originally from Hope House Press. I kept one-which would become ‘The Brand New and Improved Testament’-and gifted three, each to a special friend, whom I will refer to as M, S and T. And it should have ended there.

A few weeks ago, I ordered a new journal from HHP and was delighted to receive it a lot sooner than expected. It looked spectacular, it smelled spectacular and it was spectacular. Until I put pen to paper. The Abraxas inks I use, and which I have recently ordered six new bottles of, were not meshing well with this new paper. It felt detrimental to me because I became addicted to the rush of that particular ink on that particular paper. It was like two amazing people who should have never gotten married. So I had an idea and it involved three options: ask M for her book back, ask S for his book back, ask T for his book back.

I knew for sure that neither M nor S had started writing in their journals, but that wasn’t my main concern. I had a problem with the rudeness of what I was about to propose to two-if not three-of my favorite people. And to be honest, it was M’s book that I coveted the most because it was the same size as my previous journal. So I called S with my suggestion (because he is my moral-ethical-and-anything-related-to-etiquette compass) and he said to just go for it. So I did. And M. She was so gracious to accept my proposal of replacing her journal with a new one I placed an order for this morning.

M is Mai, and I’m calling this new journal ‘Months of Mai’. Thank you, Mai. Not for saving my life, but for saving the quality of it.