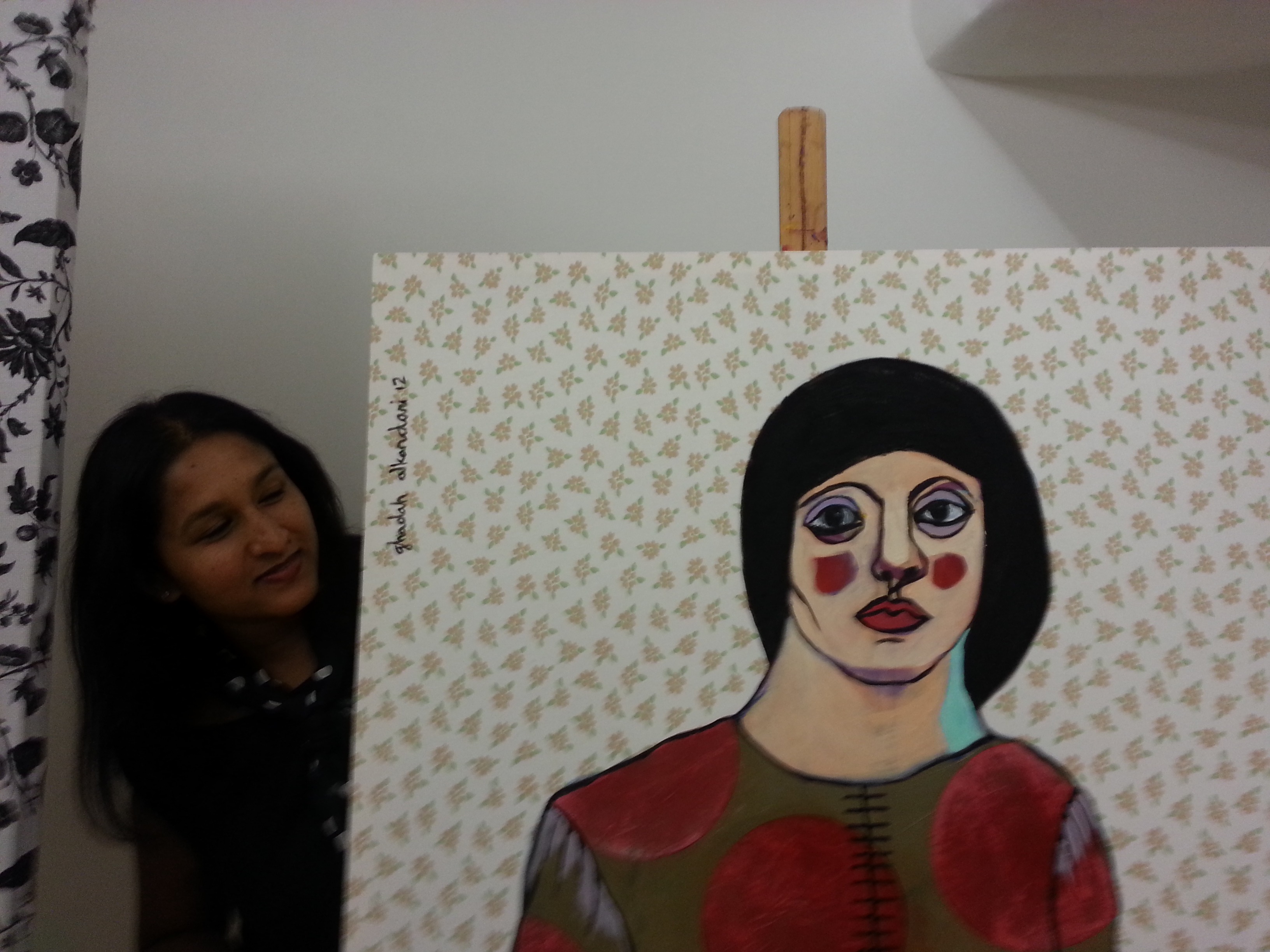 After every pgb event, I enjoy getting feedback from my guests, whether verbal or photographic. This, however, is a first: a written documentation of the evening by a guest who emailed me a couple of days ago with her thoughts, feelings and a dream about a murderer lurking behind a wall of tapestries. Here is what Ayesha Kamal, a professor in the English Department at Kuwait University wrote:

Today was one of those days when little moments seemed to come together and turn into a very fulfilling day. Slight missteps during the day–a wrong turn, a cancelled appointment, an unexpected phone call–took me in unanticipated directions which all culminated in my arrival at The Arabana Project to view Ghadah Alkandari’s artwork.

I drove down the dark alley where I thought the gallery was supposed to be, slightly doubting my sense of direction and feeling a bit nervous about the lack of light and the unpaved roads of the mainly deserted area. Taking one wrong turn too many I ended up back on the main street. I checked my phone to see if I could find any directions/hints to the location of the exhibit…all I can say is thank goodness for Instagram because a friend had just posted a picture of the exhibition. I immediately texted him to ask for the location. Unfortunately I didn’t get a reply, but I was determined not to give up so I decided to give it another go. I started to feel a bit anxious–suppose I didn’t find the place? There was something inside that really made me want to go. I can’t explain what it was; perhaps it was just my stubbornness.

As I retraced my steps, a low-slung unobtrusive building suddenly stood out. In what was all darkness before shone through a bright light highlighting a painting that I immediately recognized. What a sense of relief and excitement. spots of sunshine falling in

I did not know what to expect as I entered the hall. I had some idea about the works from what I had seen on the website but I purposefully had not explored further as nothing beats the feeling of having your breath taken away by something new, something enchanting–which is exactly what I experienced as I walked around the showroom.

The colorful lanterns hanging in the front immediately caught my attention, but I did not linger to take a look at them at that time. I headed more towards the back where the polka dot lights shining off the back wall seemed to be beckoning me. However, before heading all the way back, I stopped to admire the mini-framed sketches.

I actually have a slight apprehension of paintings/drawings/sketches of painted faces–I can’t really explain it. I am both captivated by them and troubled by them. I find them alluring and chilling. It has something to do with the eyes–the expressions can be haunting sometimes. What’s more is that you are often left to wonder exactly what the person in the image is thinking/feeling/sensing when captured in that moment. It is left to you to figure it out…and I find that somewhat daunting.

However, tonight was clearly a night when that apprehension needed to be put aside because I was confronted by many, many faces and a whole range of expressions. From the smaller sketches laid out on the table [wish I had taken a photo] to the larger than life installations around the room–walking across the polka dot covered floor, weaving in, out, and around the installations–it was unlike anything I had ever experienced.

There was one piece in particular that caught my attention, well more accurately, part of one piece that enchanted me…and that was the woman with the yellow cassette tape. There was something about that image that completely captivated me. The expression on her face, the circles on her clothes that in some places looked to me like a net draped around her, the act of hiding the cassette–the inclusion of a cassette itself (bringing back so many memories of mixed tapes exchanged between friends, and of course the significance of receiving a mixed tape from someone you had a crush on–nothing can compare to that type of giddiness) completely captivated me. I was so caught up in looking at the piece of art that I forgot to take a photo…again, luckily a friend did take a photo and he was kind enough to give me a copy–Thanks M. Among the installations were the artist’s journals with some of her sketches. I wish I had spent more time looking at them, but I know what I really needed would be a day all to myself to absorb them. There was one sketch in particular I was looking for that I had caught a glimpse of on the artist’s website. I looked for it, but didn’t find it…again, I just didn’t spend enough time flipping through the journals. My heart still skips a beat when I think of it…perhaps one day I will see it and find some way to quiet this internal flutter.

One of my favorite photos of the night is the one that I took of the lanterns. From the positioning and the lighting it looks like they are balls of light suspended in the air. There is something light and carefree about the image; at the same time, the colors are captivating. The night was dotted with conversations with the artist herself and that made all the difference to the experience. It felt like an interactive night where everything and everyone came together– what better way to end the night than to play around with some of the artist’s work, which I did in the front room with the painting that first caught my attention. I love the fact that the exhibit was on for only one night. It’s like having a unique opportunity to come and be part of something…and the next day it’s gone. It’s part of history and exists only in your memories.

I woke up this morning with a start–what a strange dream/nightmare I had.

It was a cocktail party at one of my friend’s houses. The house doesn’t exist. I have no idea where the structure of this house came from, but I can recall it so vividly.

I remember walking down a wide long room/hallway. Along the left side of the room was a long, very shallow, pool of water. In the middle of the water were circular floating candles that looked like floating polka dots on fire. I was walking with J and he was making strange commentary about the candles–I wonder who lights them? Do they step in the water and light them or are they lit then pushed around? Are they in a particular pattern or is it just random? More importantly, do they do this everyday or is it just for tonight?

Tonight was some sort of dinner party. As we were walking, we ran into R, the hostess of the party. She was giving someone a tour of her new home. She continued down the path in the opposite direction and suddenly, J disappeared as well.

The brightness of the room started to dim; I could see waving curtains and sheets of tapestry flapping in the wind though I have no idea where the wind was coming from. A figure started to approach me–his face was painted, almost like the Joker from Batman. White face paint with smudged features. There was something evil about him, but something alluring as well. I was afraid but I could not run. When he was finally standing right in front of me he told me to go to the back room–“the one you already know and I will be there shortly to kill you.”

I obeyed {my heartbeat quickens as I type this but in the dream I was not afraid}.
As he started to walk away, I slowly turned halfway and said to him, “Ok, but only as long as you agree to wipe off the face paint before you kill me.”

He replied, “I’ll see what can be arranged” and walked off.

I continued to walk down the hallway until I got to a room. There was no main wall in this room–just a cubbyhole shelf (similar to what I have in my office) that had lots of boxes and box files. It was obvious that the room I was going to was some sort of studio. The far left wall had newspaper clippings pasted all over it. There were some random helium balloons floating around–though not high in the air, kind of just hovering mid-way. The main back wall wasn’t a wall, but rather multiple sheets of large tapestry. There were some markings on the tapestries but I couldn’t tell what they were.

I walked into the room, still as if I was in a trance, and went and sat behind the white desk–which looks exactly like my desk only larger–and on a huge beanbag (must have been at least 4 feet high–I don’t know how I got on.

I sat there patiently waiting. There were many sketches lying on the table but I didn’t look through them. I simply stared straight in front of me, waiting for this man to arrive.

I don’t know how long I waited, but I remember the air around me was very still despite the fact that the canvases were still waving back and forth.

I remember I was wearing a grey skirt that had swirly circular patterns on it and a net trim that hung out from the bottom of the hem of the skirt–something that I actually can’t stand. I actually own this skirt but I haven’t worn it in months. My hands alternated between being clasped on my lap and clasped on the desk-this was the only movement I remembered.

The man entered–who knows after how long. In his hand he had a large towel folded as a rectangle, not a square–for some reason this detail seems important for me to mention. It seemed like it was wet as it looked weighted down–perhaps he was going to wipe the white face paint off or was it what he was going to use to kill me? I had no idea.

He started to walk towards me with the heavy, wet towel … … and then I woke up.

I would also like to include some of Ayesha’s journal entries. In an earlier email to me she wrote, ‘All I know is that my writing journal, which is usually just lines and lines of writing, all of a sudden has a few sketches in it. My writing seems to be coming to life and seeing the concepts in my mind moving from beyond words to some sort of visual representation is an exciting turn of events. I included a few pictures of those as well (writing journal 1 – old entry with just writing; pictures 2 & 3 – ideas coming to life). The sketches aren’t very good (I’m definitely no artist!) It was just such a new and exciting change that I had to share-it was for sure inspired by you and your work.’ Thank you, Ayesha! That is so rewarding to hear.