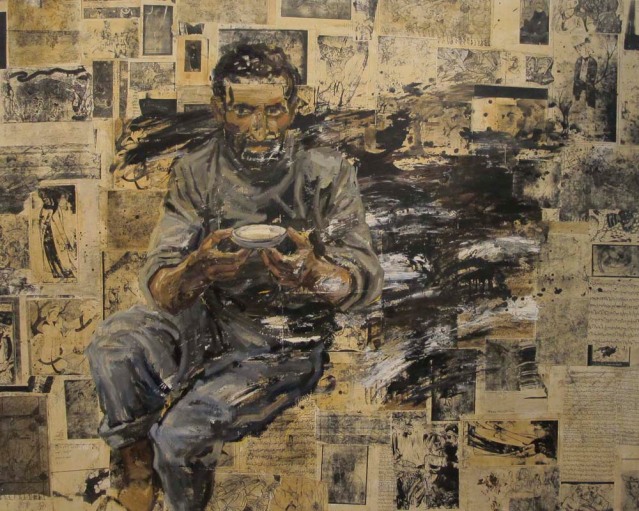 'untitled', collage and oil paint on canvas, 200 x 240 cm: this man reminds me of one of my brothers. every time i glimpsed the painting i thought: oh, it's tareq

Last Thursday, in the nick of time, I managed to make it to Reza Doust‘s exhibition at the Sultan Gallery. According to his tally, I was the fourth Kuwaiti artist to visit that afternoon. Not bad for someone who has never been in the top ten of anything before. Back to the point, I had seen some of his latest works either on his site or Facebook page, so knew what to expect. Yet I was taken aback by the sheer size of his paintings. He’s a tiny man who works in a tiny basement studio in Canada. How did he manage works of such magnitude and painted with such skill? In an area so small, how did he put so much movement and freedom into his work? I think the answer comes from a passion inside the man to release the daily burdens imposed either by others or himself. When I see the cut-outs on his canvases, the papers he has collected over the years, including earlier inspirations, I picture a madman in his laboratory, finally deciding to put his references (and life) in order. And I see an organized chaos that so appeals to my sense of dichotomy.  I envy his restraint for using color; because it’s hard to stick to a few tones on your palette and still make the painting look as colorful and vibrant as his. I know it’s a cliche, but Doust has proven that great things come in small packages.

'interactive art', collage and oils on canvas, 126 x 222 cm: this one was like a big jigsaw puzzle. i like the way these were mounted on a board, to enable the artist to shuffle them around. if i had all the money in the world, i would have bought the work as a whole, instead of just fragments of it, which is how they were being sold. shame

i like the way the character here is giving doust (in the middle) a look: you want my bitter tea but you can't have it. unless you give me a lump of sugar